Charlestown's Ursuline Convent for Girls Burned to the Ground on August 11, 1834 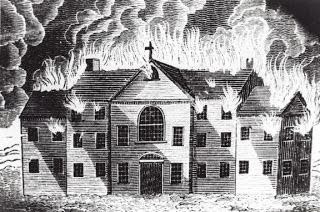 On August 11, 1834, the Ursuline Convent in Charlestown, Massachusetts, a Catholic-run boarding school for girls of all denominations, was set afire by workmen furious about the growing presence of Catholics in the town.

About a dozen frightened nuns and some 57 young female boarding students, still in their nightclothes, rushed from their beds onto the school grounds as the building went up in flames, with the bloodthirsty mob intent on burning it to the ground.

The night of terror was led by John Buzzell, a New Hampshire native who worked as a bricklayer in Boston.  The mob was prompted by an false rumor being spread around town that a girl was being held against her will in the basement of the convent.

"We remember no parallel to this outrage in the whole course of history," wrote the Boston Atlas.  "Turn to the bloodiest incidents of the French revolution - roll up the curtain that hangs before its most sanguinary scenes - and point us to its equal in unprovoked violence, in brutal outrage, in unthwarted iniquity."

The tension in Charlestown had escalated with the arrival of Irish Catholic immigrants to Boston and local towns in the early 19th century.

The convent, a boarding school for girls, especially rankled the laboring class, since the young women came mainly from wealthy Catholic and Protestant families in Boston. Fire and Roses author Nancy Lusignan Schultz writes that “these families paid a yearly tuition to the nuns equivalent to a bricklayer’s wages for six months’ labor.”

The Boston Atlas reported that the “pianos and harps, thrown from the windows when the Convent was set on fire, were subsequently burnt, and nothing but an old chair and one or two worthless articles were saved from destruction.”

But the following week, the Boston Morning Post issued a front-page notice by the school's Mother Superior, suggesting that valuable items, especially musical instruments such as "Piano Ports, Harps, Guitars, Silver Cups were stolen at the time of the conflagration," and that the "publication of these items may lead to the detection of the thieves."

The day after the attack, a group of city officials, business leaders, religious clergy and concerned citizens assembled at Faneuil Hall to decry the violent ambush.  A resolution was quickly approved, stating in part:

Charlestown's growing presence of Irish Catholics began in the 1820s, thanks to the efforts of Boston's Bishop Benedict Fenwick, who built Saint Mary’s Catholic church, opened a Catholic cemetery, and developed the twenty-four-acre Ursuline Convent, all within the space of a decade.

"The workmen, frustrated by economic woes and the growing competition from immigrants for jobs, took on a nativist mentality that put the rights of Americans above the rights of immigrants. It didn’t help that Rev. Beecher and others were preaching about a Catholic conspiracy, rekindling 17th century Puritan fears of popery and Jesuit priests that had sparked anti-Catholic hysteria more than a century earlier," according to the book  Irish Boston: A Lively Look at Boston's Colorful Irish Past.

Read more details of the episode at MassMoments, a project of MassHumanities.

For more details on Irish history in Boston, visit IrishHeritageTrail.com.