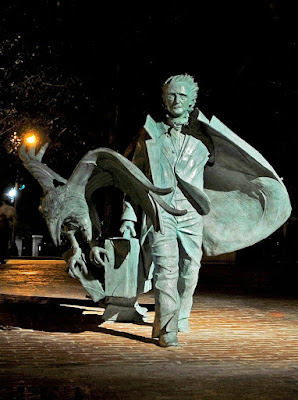 Photo Courtesy of Boston National Park Service
Edgar Allan Poe (1809-1849), the famous 19th century writer of short stories and novels, was born in Boston on January 19, 1809, to parents who were actors at the Federal Street Theatre in Boston.
On his father's side, “The poet’s ancestors were of the same Scotch-Irish stock that produced Andrew Jackson, Henry Clay and Zachary Taylor. His great-great-grandfather came over and settled in PA in 1945 and his grandfather, David , was commissary general in the continental army and an intimate friend of Gen. Lafayette,” wrote the Boston Globe.
His mother was the daughter of an English actress. Edgar’s father David, Jr and his mother Elizabeth were an ill-fated pair who were part of a traveling troupe of actors, stopping in Boston, New York and other East Coast cities.
When Poe was just three,  his father died of consumption and his mother died a month later, and Poe was adopted by the Allan family in Richmond, VA. He was educated in London and then at the University of Virginia.
In his twenties Poe moved back to Boston and his first book of poems, Tamerlane, was published.  He then joined the U.S. Army and was assigned to Battery H, 1st artillery, stationed at Fort Independence, now known as Castle Island, in Boston Harbor.
In 2014, Boston honored Poe with a life-size statue, located in a small square at the corner of Boylston and Charles Street across from Boston Common. The statue is not far from where Poe was born at 62 Carver Street (now Charles Street). The effort to build the statue was engineered by Paul Lewis, a Boston College English professor, and "a fine collaboration of several Poe scholars and aficionados," notes Poe authority Rob Valella. They created the Edgar Allan Poe Foundation of Boston, which raised funds, worked with the City of Boston Arts Commission, and generated interest in the project.
According to genealogist Mark Redfield, Poe's family originated in County Cavan, Ireland, and his great-grandfather John Poe and great-grandmother Jane McBride moved with their son David (Edgar's grandfather) to Baltimore around 1742-43. His son, David, Jr, was Edgar's father.
For more information about Boston's history, visit IrishHeritageTrail.com.