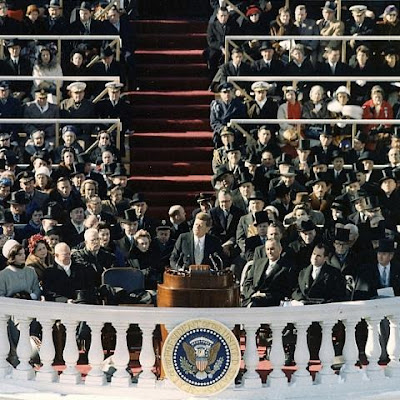 Sixty years ago, on January 20, 1961, President John F. Kennedy gave his inauguration speech on a wintry day in Washington, DC.  Supreme Court Chief Justice Earl Warren administered the oath of office.  Also on the podium: former Presidents Dwight D. Eisenhower and Harry Truman, former Vice President Richard M. Nixon, and Kennedy's wife Jacqueline and family, and other notable citizens.
See the entire video of the speech from The John F. Kennedy Presidential Library & Museum website.
Here are some passages from the speech:
"We observe today not a victory of party but a celebration of freedom--symbolizing an end as well as a beginning--signifying renewal as well as change. For I have sworn before you and Almighty God the same solemn oath our forbears prescribed nearly a century and three-quarters.
"The world is very different now. For man holds in his mortal hands the power to abolish all forms of human poverty and all forms of human life. And yet the same revolutionary beliefs for which our forebears fought are still at issue around the globe--the belief that the rights of man come not from the generosity of the state but from the hand of God.

"We dare not forget today that we are the heirs of that first revolution. Let the word go forth from this time and place, to friend and foe alike, that the torch has been passed to a new generation of Americans--born in this century, tempered by war, disciplined by a hard and bitter peace, proud of our ancient heritage--and unwilling to witness or permit the slow undoing of those human rights to which this nation has always been committed, and to which we are committed today at home and around the world.

"Let every nation know, whether it wishes us well or ill, that we shall pay any price, bear any burden, meet any hardship, support any friend, oppose any foe to assure the survival and the success of liberty.
And in ending the address, Kennedy said,
"In the long history of the world, only a few generations have been granted the role of defending freedom in its hour of maximum danger. I do not shrink from this responsibility--I welcome it. I do not believe that any of us would exchange places with any other people or any other generation. The energy, the faith, the devotion which we bring to this endeavor will light our country and all who serve it--and the glow from that fire can truly light the world.

"My fellow citizens of the world: ask not what America will do for you, but what together we can do for the freedom of man."
Read the entire speech here.