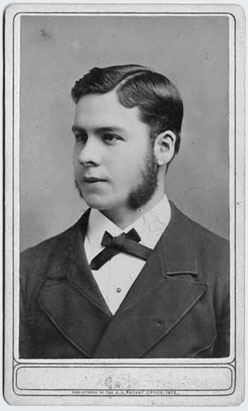 
Regarded as the Father of American Architecture, Louis H. Sullivan (1856-1924) was born on September 3, 1856 to an Irish father and a French-Swiss mother.  The family lived at 22 South Bennett Street in Boston's South End, and he attended local public schools, including English High School.
He spent his summers with his grandparents in South Reading in a bi-lingual household and he advanced quickly as a student, attending MIT at age16 and then moving to Paris to complete his studies before settling in Chicago right after the Chicago Fire of 1871, where his services were in great demand.
His father Patrick Sullivan arrived in Boston on the ship The Unicorn in July 1847 just weeks after Deer Island's quarantine station had opened for hundreds of passengers too sick to come ashore.  According to Louis, in his book, Autobiography of an Idea, his father "immediately set up a (dance) academy and was successful.  He was always successful."
Louis Sullivan was part of a 19th century movement to create an American style of architecture that acknowledged the masterpieces of European design but didn't copy them. He was Frank Lloyd Wright's mentor, and influenced a number of architects known as the Prairie School.  He coined the adage that 'form ever follows function,' and his buildings in the Midwest, just over ten stories high and considered gigantic by standards of the time, prompted the new word skyscrapers.  His most famous structures are the Wainwright Building in St. Louis and the Prudential Building in Buffalo.
Boston Globe writer Margo Miller referred to Sullivan as "one of the great fantasists, working where folktales meet science fiction….All of his ornaments reproduce a battle of nature fighting the control of art - or technology - and art fighting back."
On September 3, 1946 the Boston Society of Architects and the Massachusetts State Association of Architects placed a bronze plaque at Sullivan's birthplace at 22 Bennett Street in the South End.
For more on Boston's Irish heritage, visit IrishHeritageTrail.com or see Irish Boston: A Lively Look at Boston's Colorful Irish History.
Posted by irishboston.blogspot.com at 12:19 PM