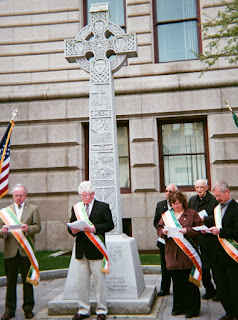 To mark the 150th anniversary of the Irish settlement in Worcester, Massachusetts, the local Irish-American community erected a Celtic Cross on Worcester Common.

The 15 foot high memorial, weighing over 13,000 pounds made of Barre Vermont granite, was designed by Joseph Calcagni.  It features patriotic, religious and family symbols pertinent to Worcester, America and Ireland.

The Celtic Cross was formally unveiled on Sunday, September 18, 1977.   Thomas J. Early, Mayor of Worcester presided, along with Daniel F. Herlighy, chairman of the Irish Memorial Committee, and members of the Ancient Order of Hibernians, especially from Division 36 in Worcester.

On May 25, 2009, Ireland President Mary McAleese laid a wreath at the Celtic Cross commemorating the arrival of the Irish in Worcester.

For more details on Irish heritage in Massachusetts, visit IrishHeritageTrail.com.

For year round cultural activities, visit IrishMassachusetts.com
Posted by irishboston.blogspot.com at 1:58 PM