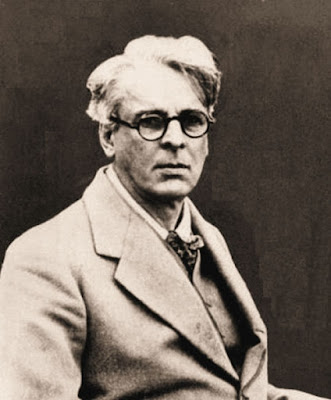 Irish poet and playwright William Butler Yeats addressed an audience at the Plymouth Theatre in Boston on Thursday, September 28, 1911 on the subject, History of the Irish National Theatre and its Purposes.

As managing director of Dublin's Abbey Theatre, Yeats was in the United States to introduce a new literary movement taking place in Ireland that he hoped would be "the awakening of the mind of Ireland."

The Plymouth Theatre, located at Eliot Street (now Stuart) and Tremont Street, was a brand new playhouse, described as "a cozy, compact and home like-arrangement, with the seats in all parts of the house as near the stage as possible."  The Abbey players christened the new theatre with their productions.

The Irish plays on opening night included The Shadow of the Glenn by John M. Synge, Birthright by T.C. Murray, and Hyacinth Halvey by Lady Gregory

Yeats was introduced to the audience by George Pierce Baker, professor of dramatic literature at Harvard University, according to a Boston Globe story on September 29, 1911.

"In Ireland, we are putting upon the stage a real life where men talk picturesque and musical words and where men have often picturesque and strange characters, that is to say, the life of far away villages where an old leisurely habit of life still exists," Yeats told the audience in Boston.

"The country life has for us the further fascination that it is the only thoroughly Irish life that is left.  All our patriotic movements go back to the peasant.  We try to recreate Ireland in an Irish way by mastering what he knows and by using it to understanding what the old manuscripts contain," he said.

Yeats and Lady Gregory came to the United States to promote Ireland's new theatre movement but also to defend it against opponents who rioted in Dublin when the Playboy of the Western World by Synge was first performed.  Critics assailed the play as a slight upon the Irish character

Yeats told reporters that 'if Ireland is to have a literature, the Irish must not resent truthful portrayals,' according to a New YorrkTimes story on October 12, 1911.

Lady Gregory said that the controversy over Synge's play was due to misunderstandings about Synge's purpose, and "to something that might be called race sensitiveness," wrote the NY Times on November 20, 1911.

When the Playboy debuted in Boston on October 16, 1911, the Boston Globe reported the play elicited 'some hisses, some cheers,' but that overall it did not cause "the excitement that some people had feared."

Yeats told the Globe he was 'very much pleased,' at the response to the opening night performance.

"I would not have been surprised if there had been more of a disturbance.  It was very mild, indeed.  I am satisfied.  I am sure that the Irish people will appreciate the play in time here," he said.

When Yeats returned to Ireland in November, he reflected on his trip.  "At Boston, the Abbey Theatre company had a flattering reception.  The more intellectual the play, the greater the success we achieved in Boston.  I attribute this to the influence of the universities," Yeats told the New York Times, in a story published on November 26, 1911.