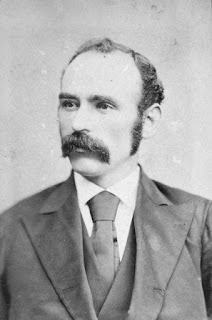 Irish republican and agrarian activist Michael Davitt spoke at the Boston Theatre on December 5, 1886 before a sold-out standing-room-only audience.

The son of parents who were evicted from their home, Davitt was introduced by Boston Irish leader and U.S. Congressman Patrick Collins, who praised Davitt creator of the Land League, for "turning his own misfortune into glory."

Davitt described his efforts “to band together tenant farmers of in the Land League to defend their homes and earnings from the rapacity of an idle and non-producing landlord class.


“A few years ago the Irish question was involved in obscurity: today the whole world is discussing its merits.  A few years ago most civilized nations, not excepting , sympathized as much, if not more, with , for having a turbulent people on her hands with the Irish.  Today the position is reversed and has the symphony and good will, I believe, of most civilized nations in her righteous struggle.”

The following day, David met at Parker’s Hotel with 25 members of the Philo-Celtic Society, where he was joined by Congressman Collins, Boston Mayor Hugh O’Brien and Irish leader John Boyle O’Reilly.

Prior to visiting Boston,  Davitt had addressed enthusiastic audiences in Providence and Newport RI.

Posted by irishboston.blogspot.com at 8:55 PM