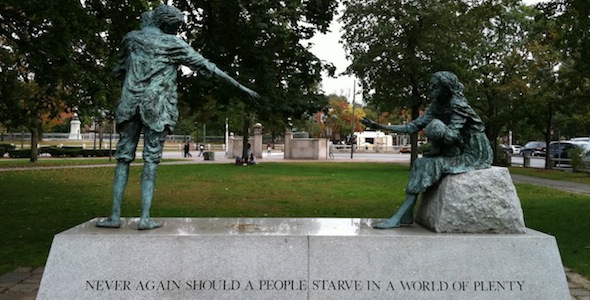 The Cambridge Irish Famine Memorial was created by Maurice Harron of Derry, Northern Ireland, who said the sculpture "is meant to convey the tragedy, two people dying, two people escaping, the fearful guilt of leaving loved ones behind, and the will to carry on."

At the dedication ceremony, President Robinson said, "Part of Looking back and remembering was to link the Irish famine with modern famine and hunger and inequalities in our world.  It reinforced a very strong commitment of the Irish people to developing countries."

The Cambridge Irish Famine Memorial was the idea of John Flaherty, an immigrant from Galway who is active in the greater Boston Irish-American community.   It was funded by local businessman John O'Connor and supported by the city's diverse community of politicians, activists, neighborhood residents and historians, including the Cambridge Historical Society.

Find out more about Irish history in greater Boston by visiting IrishHeritageTrail.com.

For details on visiting Cambridge, Massachusetts, go to CambridgeUSA.org.

Posted by irishboston.blogspot.com at 10:39 AM