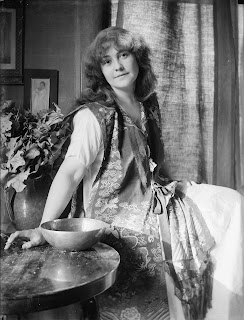 The Norman Rockwell Museum in Stockbridge MA has a new exhibit titled, Rose O'Neill: Artist & Suffragette, on display through September, 2020.

The exhibit is timely since 2020 marks the 100th anniversary of American women formally given the right to vote, a cause to which O'Neill was devoted.

Born in Wilkes Barre, PA, Rose O'Neill (1874-1944) and her family moved to Nebraska when she was young, and grew up in an artistic household where creative expression was encouraged and prized.  A self-taught illustrator, O'Neill moved to New York City at age 19 and soon her work was being published in leading magazines such as Harper's, Cosmopolitan and Good Housekeeping, as well as Puck Magazine.

In 1909 O'Neill created the popular characters the Kewpies dolls, elf-like figures that were immediately popular with the general public.  The merchandising of Kewpie dolls made O'Neill a millionaire, according to the exhibition notes. 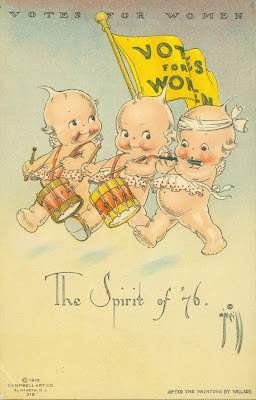 O'Neill became heavily involved in the women's suffrage movement in 1915, and for the next five years gave speeches, illustrated posters and marched in parades, as the momentum built to give women the right to vote.

After passing through U.S. Congress on June 4, 1919, and receiving the necessary three-fourths approval of the states on August 18, 1920, the 19th Amendment was officially ratified by the U.S. Secretary of State on August 26, 1920.

The Norman Rockwell Museum contains the world's largest collection of illustrations, paintings and art by Norman Rockwell, one of America's beloved artists whose iconic work captured the spirit of the United States in the 20th century.  He lived in Stockbridge for the last 25 years of his life.