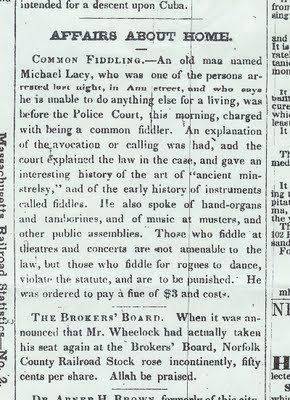 As part of the Boston Police raids on Ann Street in Boston's North End in April 1851, the Boston Herald reported that "an old man named Michael Lacy was one of the persons arrested" in the sweep of dance cellars, gambling dens and brothels of that notorious section of town.

Lacy explained to the court "an interesting history of the art of ancient ministrelsy and of the early history of instruments called fiddles.  He also spoke of hand-organs and tamborines and of music at musters and other public assemblies."

The court ruled that "Those who fiddle at theatres and concerts are not amenable to the law, but those who fiddle for rogues to dance, violate the statute, and are to be punished."

Lacy was ordered to pay a fine of $3 and costs, the Herald concluded.

For more on the history and heritage of the Boston Irish, visit IrishHeritageTrail.com.

For more about the Irish in Boston, read Irish Boston: A Lively Look at Boston's Colorful Irish History, published by Globe Pequot Press.

Posted by irishboston.blogspot.com at 5:53 PM