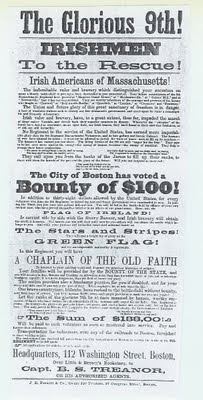 On April 15, 1861, two days after the attack on Ft. Sumter, President Abraham Lincoln issued a proclamation seeking 75,000 volunteers to join the Union Army.

In Boston, Massachusetts, Irishman Thomas Cass began recruiting Irish immigrants to form the Massachusetts 9th regiment.  The volunteers came largely from Boston and the nearby towns of Salem, Milford, Marlboro and Stoughton. A total of 1,727 men enlisted.

The Irish volunteers encamped on Long Island in Boston Harbor through May, and on June 11 the Regiment was mustered into service.

The 9th enjoyed a big send-off on June 25, 1861, when the troops made their way from Long Island to Long Wharf in Boston, then marched to Boston Common, where Governor John Andrew welcomed them and thanked the two commanders, Colonel Thomas Cass and Lieutenant Colonel Patrick Guiney.

Governor Andrew presented them with flags of the United States and the Commonwealth of Massachusetts, and the regiment was also permitted to carry its own Irish flag, which was donated by Mrs. Harrison Gray Otis. The flag is now part of the Hall of Flags at the Massachusetts State House.

The regiment fought bravely at many battlefronts during the Civil War, including Malvern Hill and Gettysburg.  The regiment returned to Boston on June 13, 1864 and was mustered out on June 21, 1864.

Excerpts from Irish Boston: A Lively Look at Boston's Colorful Irish Past.

For year round information on Boston Irish history and heritage, visit IrishHeritageTrail.com

For year round details on Irish cultural events, visit IrishBoston.org.