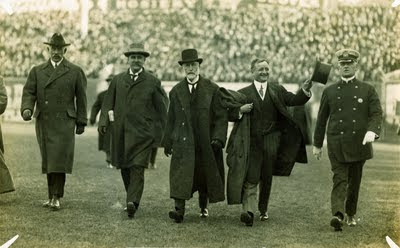 Photo of Mayor John "Honey Fitz" Fitzgerald (waving hat), courtesy of JFK Library
Boston Mayor John Fitzgerald threw out the first pitch at Fenway Park at 3:00 p.m. on Saturday afternoon, April 20, 1912 before a hometown crowd of 24,000 people, thus christening the opening of one of America's most famous baseball parks.
The Boston Red Sox beat the New York Highlanders (later called the New York Yankees)  in an 11-inning game, by the score of 7-6.  John J. "Buck" O'Brien from Brockton was the starting pitching for the Sox and he was relieved by Charley Hall in the fifth inning.
The park was built by Charles E. Logue, a renowned builder who immigrated from County Derry, Ireland to Boston in 1881 at the age of 23.  He founded a successful company that built many of the city's schools, hospitals and college campuses over the next four decades. His company, now called Logue Engineering,  is still in operation five generations later.
The architect was James E. McLaughlin, who designed the Boston Latin School and the Police Station on D Street in South Boston among others.
Boston Globe sports writer Timothy H. Murnane wrote, "The day was ideal.  The bright sun brought out the bright colors of the flags and bunting that decorated the big grandstand...Before the game started, the crowd broke into the outfield and remained behind the ropes, forcing the teams to make ground rules, all hits going for two bases."
For more information on Fenway Park, home of the Boston Red Sox, click here.
For year round information on Irish culture, heritage and history in Massachusetts, visit the Boston Irish Tourism Association.