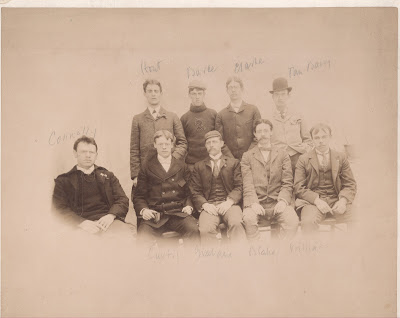 The Modern Olympic Games kicked off in Athens, Greece, on April 6, 1896, rekindling the ancient sporting competition after an absence of 1,500 years.  Thirteen nations participated.

Boston, Massachusetts was well-represented at the Games that year, with six athletes making the journey to Greece. Also participating was a team from Princeton University in New Jersey.

According to the book, Irish Boston, Connolly was one of twelve children (including eight boys in a row) born in South Boston to immigrant parents John and Ann (O'Donnell) from Inis More, Aran Islands, off the coast of County Galway, Ireland.

The American team left New York on March 20, 1896 on a German Steamer, arriving in Naples twelve days later.  They took a train across Italy, then caught a steamer to Patras, Greece, followed by a ten hour train ride to Athens, arriving on April 5, 1896.

The Americans nearly missed the Games because of a mis-communication about when the event actually started.  While most of the world relied on the Gregorian Calendar, the Greeks still used the Julian Calendar, a difference of twelve days.

Connolly recounts sitting in a cafe the morning of April 6, 1896, thinking they had twelve days to prepare for the competition.  He was shocked to discover that his event was starting in just a few hours!

The team raced to the stadium and before long Connolly was competing in the Hop, Skip and Jump (now called the Triple Jump.)  He won the event with a leap of at 44 feet, 9 3/4", thereby becoming the first winner of the Modern Olympic Games.

Beverly Cronin of the Boston Herald described the scene:  "Connolly walked up to the line, and with Prince George of England and Price George of Greece as judges, yelled in a burst of emotion, 'Here's one for the honor of County Galway,' before making his winning jump."


For more history on the Boston Irish, visit IrishHeritageTrail.com.

Posted by irishboston.blogspot.com at 10:18 AM