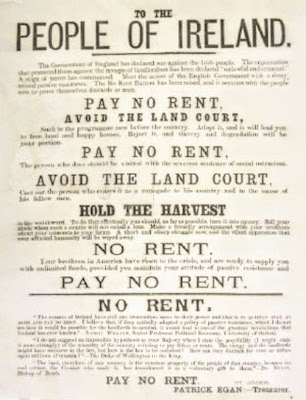 On February 11, 1881, public officials, distinguished citizens and Irish-American leaders gathered at Faneuil Hall in downtown Boston to show support for the Irish National Land League movement and to criticize the British government for trying to thwart the Land League movement in Ireland by arresting its leaders.
Among those present were Irish-American leaders John Boyle O'Reilly and Patrick A. Collins, Boston Mayor Frederick O. Prince, General Benjamin Butler and abolitionist Wendell Phillips.
Mayor Prince expressed outrage at “the tyranny of the British government in arresting and imprisoning, without sufficient reason, that good man and true patriot, Michael Davitt.”
Patrick Collins said, “This is not simply an Irish movement, but a movement in the interests of justice, truth, human rights and the civilization of the 19th century. What is happening in Ireland today is to happen in England and Scotland tomorrow, and this the British government knows and dreads.”
General Butler said, “In Ireland, the greater part of the men owning the larger share of the lands of Ireland had gone abroad, leaving the land in the charge of agents and middlemen, who had no interest in her people and no employment but to see how much money could be wrong out of the Irish people for their masters abroad.”
John Boyle O'Reilly read aloud a resolution that said in part:
"We send to the people of Ireland a profound assurance of American sympathy with their sufferings," while also condemning the "shocking infringement of liberty made by the English parliament in violently expelling members who had only exercised their rights."
The resolution was passed…” that we hereby send to the people of Ireland a profound assurance of American sympathy with their suffering and so far as international comity allows of earnest cooperation with their constitutional agitation, which has already preserved them from the calamitous consequences of famine.”
Three nights later, an equally large crowd met at the Opera House on Dudley Street in Roxbury to support the Land League and to condemn the English for their role in obstructing the law.  Among the speakers was City Alderman Hugh O'Brien, who would later be elected the first Irish Catholic mayor of Boston.
For more about Boston Irish history, visit the IrishHeritageTrail.