Irish tenor John McCormack made his debut at Boston Symphony Hall, 110 Years Ago on February 5, 1911 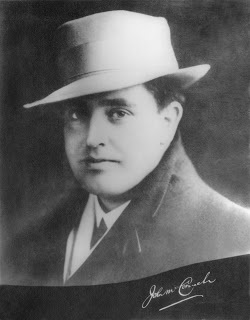 Courtesy of Boston College, John J. Burns Library
On February 5, 1911, famed Irish tenor John McCormack made his debut at Boston Symphony Hall, one of the great concert venues of the world.  Between 1911 and 1936 he performed there sixty-seven times, more than any other singer.
McCormack’s arrival on the music scene helped to increase the popularity of Irish melodies in the United States, especially the works of Irish composers such as Thomas Moore and Samuel Lover.  McCormack also added credibility to Irish-American songsters like Chauncey Olcott and Ernest Ball, who co-wrote McCormack’s first hit “Mother Machree,” in 1910. Of McCormack’s rendition of “Mother Machree,” author Mark Sullivan observed, “true Irish songs enabled a singer to be sentimental without causing shivers to the discriminating listener.”
The Irish Music Collection at Boston College's John J. Burns Library has an important collection of materials about John McCormack.  And the Archival Collection at Boston Symphony Hall has  programs from McCormack's concerts between 1911 and 1936, plus various newspaper clippings.
(Excerpted from Irish Boston: A Lively Look at Boston's Colorful Past, published by Rowman & Littlefield.)