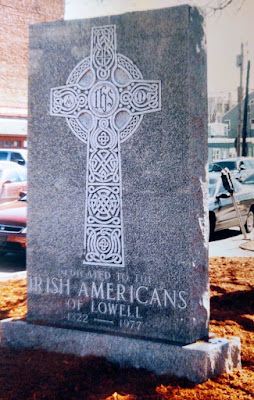 In 1977, a Celtic Cross was placed in O'Connell Park on Merrimack Street across from Lowell City Hall, as part of America's Bicentennial Celebration.  The granite monument was carved by local artisan Adian Luz.
The text on the back of the monument reads:

The Irish community of Lowell was the first ethnic group to inhabit this area. Through their efforts in every facet of city life, they helped to establish Lowell as one of the most important cities in the nation.
The Irish first began settling here in 1822, when the Irish first settled here according to historians Leo Panas and Anne Quinn, who wrote:
"Their coming was inauspicious; in 1822, 30 laborers, led by Hugh Cummiskey walked from Charlestown to widen and build arteries from the old Pawtucket canal….These early Irish settlers were sturdy. They spoke Gaelic but knew enough English to follow directions and were sought after by the local employers of Lowell."
Despite opposition from local nativists who objected to the immigrants, Lowell's first Catholic church, St. Patrick's, was dedicated on July 3, 1831,  with over 1,000 parishioners. It provided an anchor for the Irish laborers who were working in Lowell during those years.   Later in the century, the church was rebuilt by Ireland's famed church architect Patrick Keely.
Local historian and author David D. McKean has a blog called Lowell Irish that delves into the history of the Irish experience in Lowell, while Richard  Howe's blog, Voices from Lowell & Beyond, covers the history of Lowell as well as its cultural and literary connections with Ireland.
An important book for historians is Irish Catholic Genesis in Lowell by George F. O'Dwyer of the American Irish Historical Society.  First published in 1920, it was re-published in 1981 by the Lowell Museum Corporation.
Lowell has an AOH Chapter, James C. Campbell Division 19, which is active in the community in preserving Irish culture in Merrimack Valley.