Irish Bond Drive to Support the Irish Republic Kicked off in Boston, Massachusetts on February 24, 1920 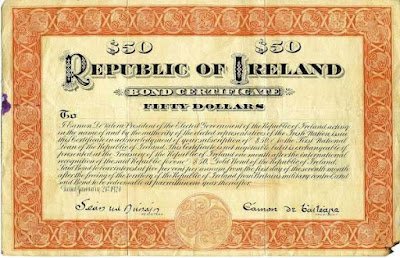 101 years ago this week, Irish organizations in Boston and across Massachusetts enthusiastically geared up for an Irish Bond drive that would raise money to create an Irish Republic.
Organized by the Friends of Irish Freedom, the drive aspired to raise one million dollars in Massachusetts, of which the Boston goal was half a million dollars, out of a total goal of $10 million across the United States.
The bonds went on sale on Tuesday, February 24, 1920 not only in Massachusetts and the United States but across the world.

The denominations of the bonds ranged from $10 to $10,000, and the success of the drive depended upon the number of $10 bonds sold, according to state chairman Thomas Walsh.  Still, Walsh said  he was counting on "some rich Bostonians of Irish sympathy" to purchase the $10,000 bonds, reported The Boston Globe.
Among the local groups involved in the drive were the County Galway Men's Association and the Gaelic School.

In Charlestown, six year old Ann Bonner was the first person to purchase bonds there, and was described by the Gobe as "one of the youngest members of the Friends of Irish Freedom."
In the days leading up to the bond sale, large turnouts of Irish supporters took place in South Boston, East Boston, Roxbury and Jamaica Plain, as well as in the nearby cities of Lynn, Salem and Quincy.
All told, Americans raised $6 million by purchasing Irish bonds to finance the War of Independence in Ireland.  The people of Massachusetts raised over $2 million, more than doubling the original goal of $1 million, according to a 1966 account by one of the organizers, Patrick J. Moynihan.
Find out more about Boston's Irish history by visiting IrishHeritageTrail.com.