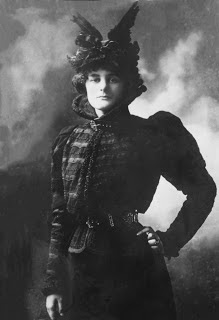 Irish rebel Maud Gonne arrived in Boston on Sunday, February 17, 1900 and was greeted at South Station by a delegation of 50 men and women from Irish societies, who escorted her to the Vendome Hotel on Commonwealth Avenue.
She was on the last leg of a New England speaking tour in which she lambasted the English for starting the Boer War in Africa. The speaking tour took her to Lowell, Fall River, Brockton and other Irish-American enclaves.
On Monday, February 18, Gonne spoke at Tremont Temple near Boston Common, drawing 2,000 cheering supporters. There she uttered a phrase that bespoke the mindset of many Irish people. "From an Irish point of view," she said, "it matters not whether it be right or wrong, the nation that is the enemy of England is a friend and ally of Ireland."
That proposition was later rephrased by Irish rebel James Connolly as "England's difficulty is Ireland's opportunity."
The Boston organizers read a fiery proclamation, which said in part: "We hail with pride the brilliant success of the Boers arms when England's robber flag was time and again trailed in the dust, and when her army of lions led on by asses was routed and discomfited."
Gonne left from New York on March 7 to return to Ireland, just in time to protest Queen Victoria's first and only visit to Ireland in April 1900.
Maude was the longtime muse of Irish poet William Butler Yeats, who also came to Boston on several occasions to promote Irish theater. In his famous poem, Easter 1916, Yeats referred to MacBride, who was executed by English soldiers in the wake of the 1916 Easter Rising.
Learn more about Boston's Irish history by visiting IrishHeritageTrail.com.