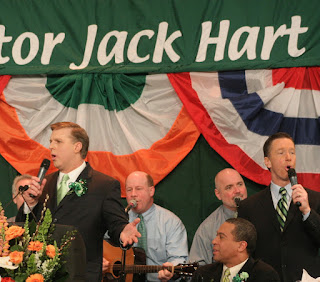 The people in South Boston take their jokes and their politics seriously – and that’s why the annual St. Patrick’s Day breakfast this weekend is the city’s most important event of the Irish season.

On Sunday, March 20, Southie’s popular state senator Jack Hart expects to welcome over 1,000 people to attend the breakfast at the majestic Boston Convention Center, a new facility presided over by another South Boston native, Jim Rooney.

Sinn Fein chief Gerry Adams sat at the big table and gave the audience an update on Northern Ireland.

And Ronan Tynan, who had just defected from New York to Boston, appeared in a Red Sox cap and sang a few songs.  Tynan has been invited back again this year.

The two-hour slag fest of songs, stories, jokes, lampoons, and maneuvering often has repercussions on the local, statewide and even national political stages.  It is televised live on New England Cable News throughout the region to millions of viewers.

Anyone can show up at the breakfast and test their wit in the tough Southie environment. Presidential candidates Al Gore, Mitt Romney and Joe Biden have all stopped by to tell a few jokes and test the political waters.
And the telephone sitting on the rostrum has taken calls from Presidents Ronald Reagan,  Bill Clinton and George W. Bush.

The annual event started out as a luncheon at Dorgan’s Harbor House back in the 1930s, when nationally renowned politicians like Governor James Michael Curley and US House Speaker John McCormack ruled the state’s political establishment.

In the 1950s and early 1960s, South Boston politicians John E. Powers and Joe Moakley held court at the luncheon each year.   In 1962 there was a dramatic face-down between Senate candidates Ted Kennedy, an untested newcomer, and South Boston native son Eddie McCormack, running for John F. Kennedy’s seat.  Ted won that seat in an upset.

Dorgan’s burned down in 1974, and the event moved to the Bayside Club on Eight Street, where South Boston state senate president Billy Bulger took it over and turned it to an art form over the next thirty years.

Congressman Lynch served as host master when he was the state senator from South Boston, and now Hart is the master of ceremonies.

For local politicians, it’s a chance to move to a bigger stage and get your face in front of millions of people.

For Boston City Councilor Bill Linehan, a Southie native who started volunteering for local chieftains like Maurice Donahue and Joe Moakley back in the 1960s, the chance to finally get on stage was a dream come true.

“My first breakfast as an elected official was so special,” he recalls.  “I have worked these events over the years, helping to set up, working the doors, a spectator in the room.  And then in 2008 Jack Hart handed me the microphone and said let’s sing some songs.  The first words I spoke were, ‘Ma, I made it!’”